To anyone who lives here, or anyone who’s watching, the situation is maddening and seems utterly unsustainable. So what’s the solution?

There’s an overwhelming to-do list. But one of the clearest conclusions, as experts have been saying for years, is that California must begin to work with fires, not just fight them. That means reversing a century of US fire suppression policies and relying far more on deliberate, prescribed burns to clear out the vegetation that builds up into giant piles of fuel.

Such practices “don’t prevent wildfires,” says Crystal Kolden, an assistant professor at the University of California, Merced focused on fire and land management. “But it breaks up the landscape, so that when wildfires do occur, they’re much less severe, they’re much smaller, and when they occur around communities, they’re much easier to control.”

The Great Fire of 1910 burned 3 million acres across Idaho, Montana, and surrounding areas, killed nearly 90 people, destroyed several towns, and famously ushered in an era of zero tolerance for fires in the US. It and severe fires that followed prompted the US Forest Service to officially implement the “10 a.m. policy” in 1935, with a goal of containing any fire by that time the morning after it was spotted.

Decades of rushing to stamp out flames that naturally clear out small trees and undergrowth have had disastrous unintended consequences. This approach means that when fires do occur, there’s often far more fuel to burn, and it acts as a ladder, allowing the flames to climb into the crowns and take down otherwise resistant mature trees.

Climate change, which exacerbates these risks, seems to have finally tipped the balance of what was an increasingly untenable situation, says Anthony LeRoy Westerling, who is also at UC Merced. In California, it almost certainly intensified the prolonged drought earlier this decade, which killed some 150 million trees in the Sierra Nevada range.

Meanwhile, temperatures are rising and rainfall patterns are becoming more extreme. Unusually wet winters promote the growth of trees and other plants, followed by dry, hot summers that draw the moisture out of them.

This creates a tinderbox when the gusty winds arrive in the fall: a vast buildup of dry fuel just awaiting a spark, whether from a lawnmower, downed power line, or lightning strike.

A century-long backlog of work

The problem now is the staggering scale of the work to clean this up.

As much as 20 million acres of federal, state, or private land across California needs “fuel reduction treatment to reduce the risk of wildfire,” according to earlier assessments by the California Department of Forestry and Fire Protection and other state agencies. That’s nearly two-thirds of the state’s 33 million acres of forests and trees, and six times the area that has burned so far this year.

This “treatment” can include prescribed burns set under controlled conditions—ideally, spaced out geographically and across the year to prevent overwhelming communities with smoke. It can also mean using saws and machines to cut and thin the forests. Another option is “managed wildfire,” which means monitoring fires but allowing them to burn when they don’t directly endanger people or property.

More than a century of deferred work, however, means it’s hard to get into places that need thinning. It’s also risky to do prescribed burns or allow natural fires to rage, since the fuels are so built up in many places, Westerling says. 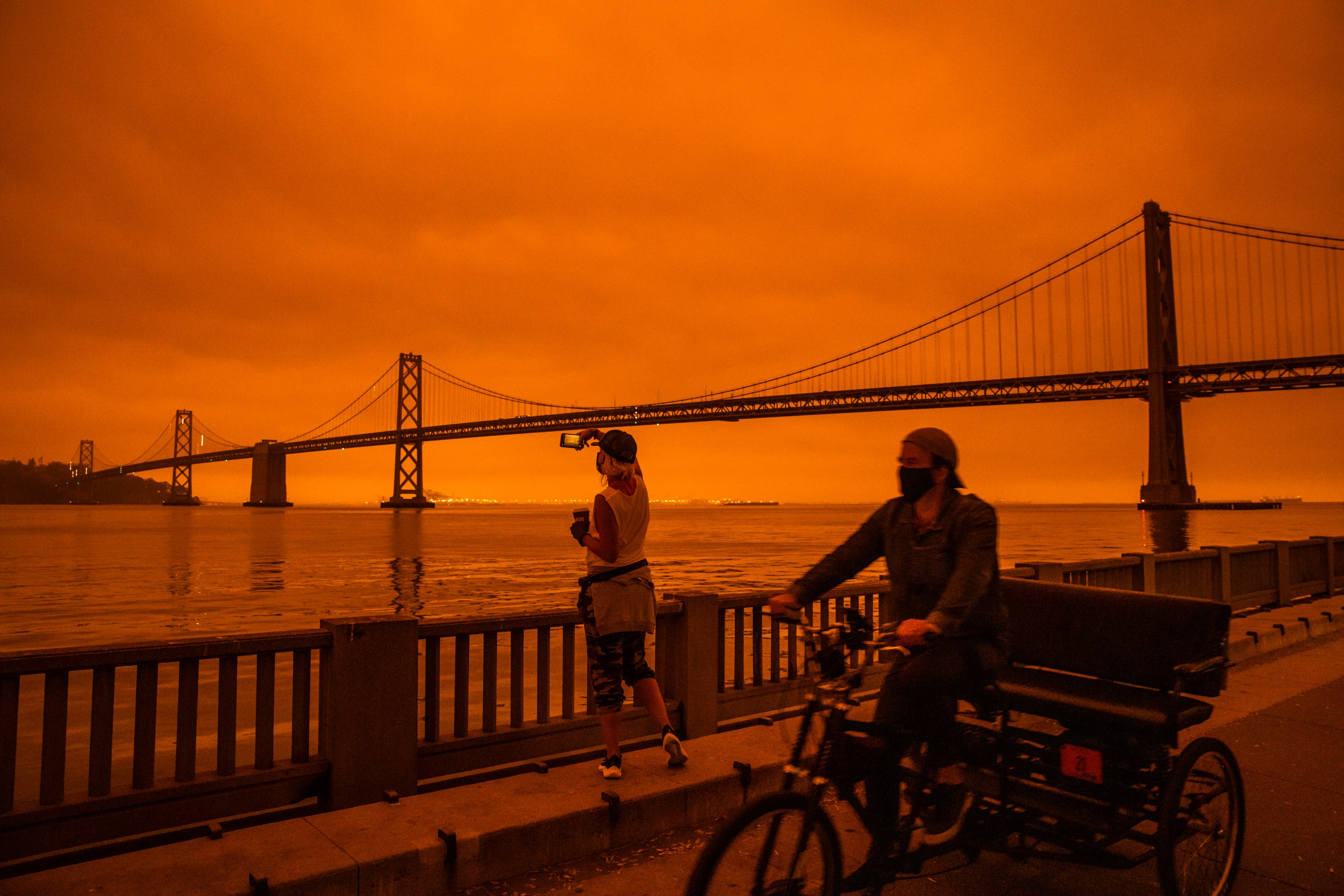 Amy Scott takes in the views as smoke from wildfires burning across the west cast San Francisco in a dark, orange glow earlier this month.

A 2018 report by the Little Hoover Commission, an independent state oversight agency, recommended cleaning out 1.1 million acres a year. That would still take two decades, and require a lot of workers and money. Prescribed burns on forest and park lands can cost more than $200 per acre, while thinning can easily top $1,000, depending on the terrain. So the total costs could range from hundreds of millions of dollars to well above a billion per year.

Still, that’s a fraction of the costs incurred by out-of-control wildfires. To take just one example, the devastating Wine Country Fires in October 2017 did more than $9 billion worth of damage in a single month. Battling wildfires on US Forest Service land runs more $800 an acre.

And without thinning and burning, the wildfires are only going to get worse.

If the goal is to burn up excess fuel, why not just let the wildfires rage? The problem is that runaway fires in overgrown forests don’t achieve the same results as controlled burns. These intense blazes can level vast stretches of the forest rather than simply clearing out the undergrowth and leaving the big trees standing, says Scott Stephens, a professor of fire science at UC Berkeley. Instead of restoring the health of the forests, large, uncontrolled fires often transform them into shrub land, where vegetation grows quickly and severe fires can rapidly return.

The state isn’t doing anything close to the necessary amount of work today. Thinning and prescribed burns both generally cover around tens of thousands of acres per year, a tiny fraction of what the Little Hoover Commission recommended. In 2018, the state passed a law dedicating $1 billion over five years to wildfire prevention. Late last year, Governor Gavin Newsom signed a package of fire bills that included another $1 billion for preparedness and emergency response. That’s still not at the levels needed.

The good news is that California reached an agreement in August with the US Forest Service to boost these efforts, with a goal of treating a million acres per year for the next two decades. The work would be evenly split between the parties, even though the federal government owns 57% of California’s forests while state and local agencies only own 3%. (The remaining 40% is held by “families, Native American tribes, or companies.”)

The bad news is it’s a “memorandum of understanding,” not a binding law—and there’s no firm additional funding commitment.

The problem is that “these agencies have been saying things like this for the better part of five decades,” says Michael Wara, a senior research scholar at the Stanford Woods Institute for the Environment and member of California’s Wildfire Commission. “The funding is key. As is a clear line of accountability if they don’t actually follow through.” 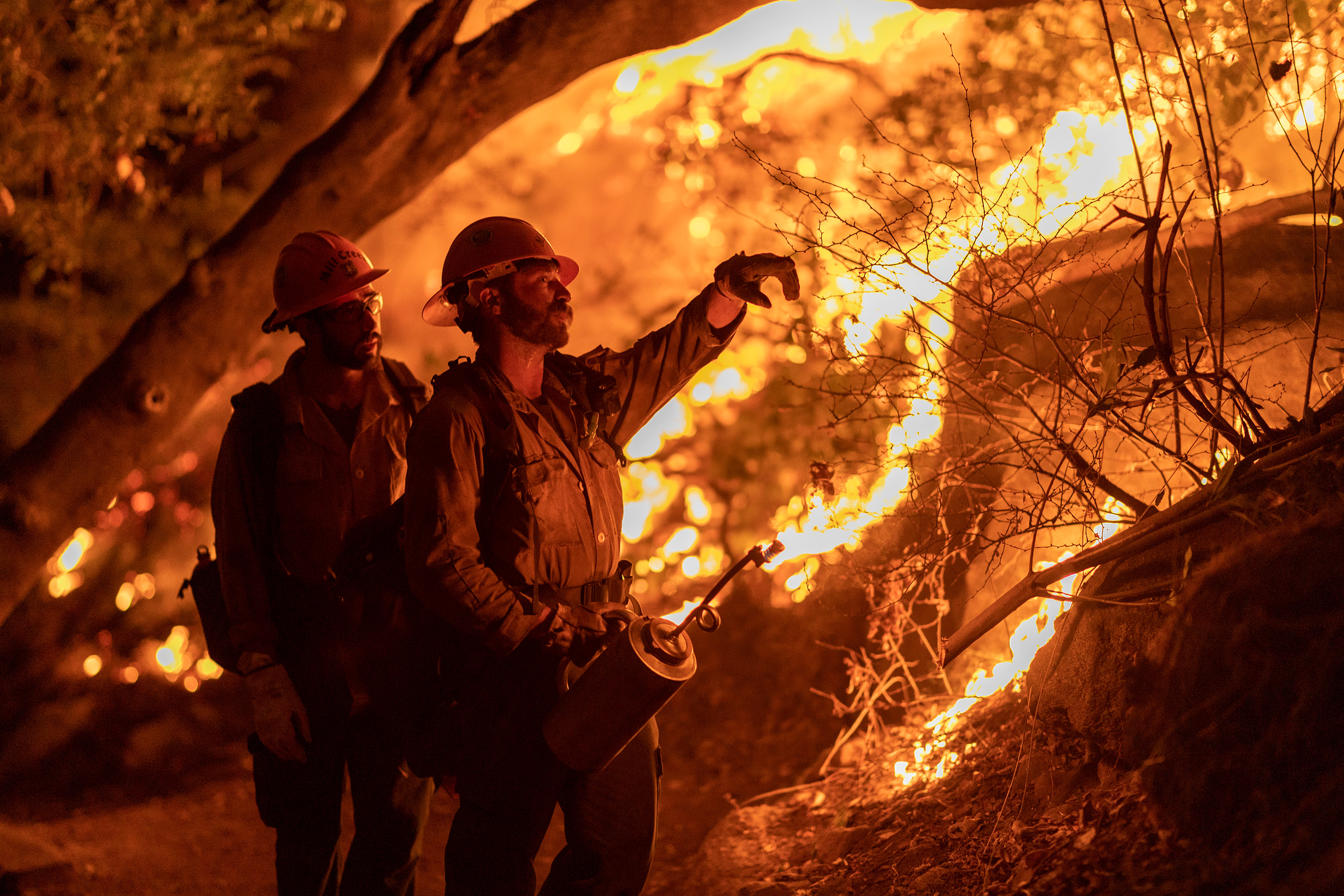 Mill Creek Hotshots set a backfire to protect homes during the Bobcat Fire in Arcadia.

Prescribed burning faces other hurdles, including public concerns over smoke, safety, and wildlife; drawn-out environmental review processes; and conflicts with timber interests. The logging industry owns 14% of California’s forest land and makes money by removing the mature trees, not the kindling.

Setting far more fires will require sweeping regulatory reforms to streamline the approvals process. It will also likely necessitate the creation or appointment of a state agency singularly dedicated to fuel treatment, Wara says. Right now, burning and thinning efforts are managed by the California Department of Forestry and Fire Protection, which, he believes, will always prioritize the job that the public and politicians judge it on: containing the death and destruction from active fires.

“Fire season is always coming, and they’re always responsible for it,” Wara says. “I think we need a new agency whose sole mission is fire risk reduction.”

The fire next time

Kolden, of UC Merced, stresses that California will also need to prepare for the fires that will inevitably break out no matter what the state does.

A look at the 3D animals and other objects viewable in Google Search using AR on a variety of smartphones and tablets, added since Google’s 2019 I/O Conference (Ben Schoon/9to5Google)