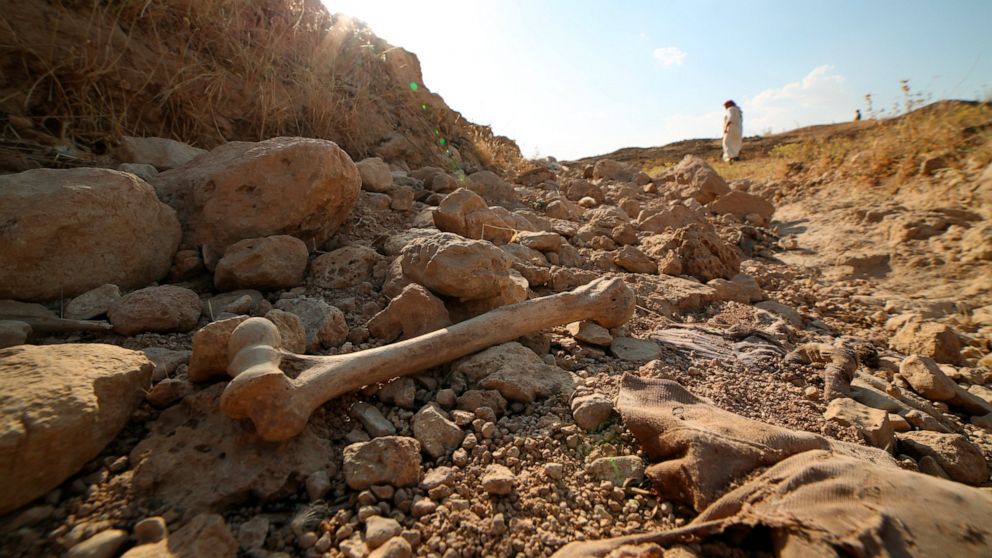 Iraqi authorities have uncovered a new mass grave site left by the Islamic State group in northern Iraq this week, believed to contain more than 100 bodies

MOSUL, Iraq — A human skull, a pair of worn trousers and a shoe were among the remains unearthed from a mass grave discovered this week in northern Iraq, a remnant of the brutal rule of the Islamic State group, Iraqi officials said Thursday.

The new mass grave was discovered on Monday in the village of Humeydat near the Badoush area west of the city of Mosul, six years after the IS group — at the height of its power — declared a caliphate that stretched across eastern Syria and much of northern and western Iraq.

Dozens of bodies were found buried in a trench stretching hundreds of meters (yards) long. Forensics experts have carried out an initial investigation but the spread of the novel coronavirus has impeded excavations, medical officials in Mosul told The Associated Press.

While an investigation is needed to identify the bodies, many believe they were Shiite convicts taken from the local Badoush prison by IS and killed by the militants, shortly after they seized Mosul in June 2014.

Iraqi forces recaptured the prison in March 2017. IS allegedly killed up to 600 inmates in the prison, most of them Shiite detainees. According to an investigation by Human Rights Watch at the time, based on eyewitness accounts, at least 1,500 inmates were rounded up and transported to a stretch of desert. There, Sunni and Shiite inmates were separated and the latter killed.

Iraqi security forces with assistance from the U.S.-led coalition defeated IS and reclaimed northern Iraq in a 2016 military campaign. Though IS no longer holds territory in Iraq, remnants of the group are still active and routinely carry out attacks against Iraqi security forces.

But memories of the group’s brutal reign persist, years after the military campaign to root them out.

Hussein al-Nesr, a resident of the Badoush area, is sorrowful the newly found remains could not be given a proper burial.

“These are all filled with humans,” he said, pointing to the site where IS is believed to have committed the massacre. “There are so many, you can’t bury them with hands.”

He had tried in vain to give the victims a proper burial. Once, al-Nesr had offered a young man passing by in a truck 200,000 Iraq dinars and a can of diesel to bury the bodies. He initially agreed, but was never heard from again.

The Mosul Martyrs Foundation, a government institution caring for the families of those killed under IS, examined the area initially, explained Dr. Hassan Raouf, head of Mosul’s forensics department, affiliated with the Health Ministry. “But we will not make any excavations or exhume the bodies due to the coronavirus situation in Mosul and Iraq.”

At least 2,160 Iraqis have died among over 53,000 confirmed cases of the virus across Iraq. The country has seen an exponential increase in virus cases in recent weeks.

Raouf estimates there are over 100 bodies buried in the site, “but it could be much more.”

“We have a large database that contains samples from the relatives of those missing and hopefully we will be able to identify these bodies,” he said.

Prior to the virus outbreak, Iraq faced challenges in properly examining mass graves. A specialized directorate in the government tasked with opening and inspecting mass grave sites is understaffed and lacks space to store and identify human remains, according to a U.N. report in November 2018.

According to the report, meetings with officials from the Iraqi mass graves directorate revealed that its staff of 43 covers the entire country — not enough to address the scale of new discoveries. It also said there was not enough equipment at the disposal of the government to excavate graves.

UN chief: Use pandemic to ‘rebuild our world for the better’