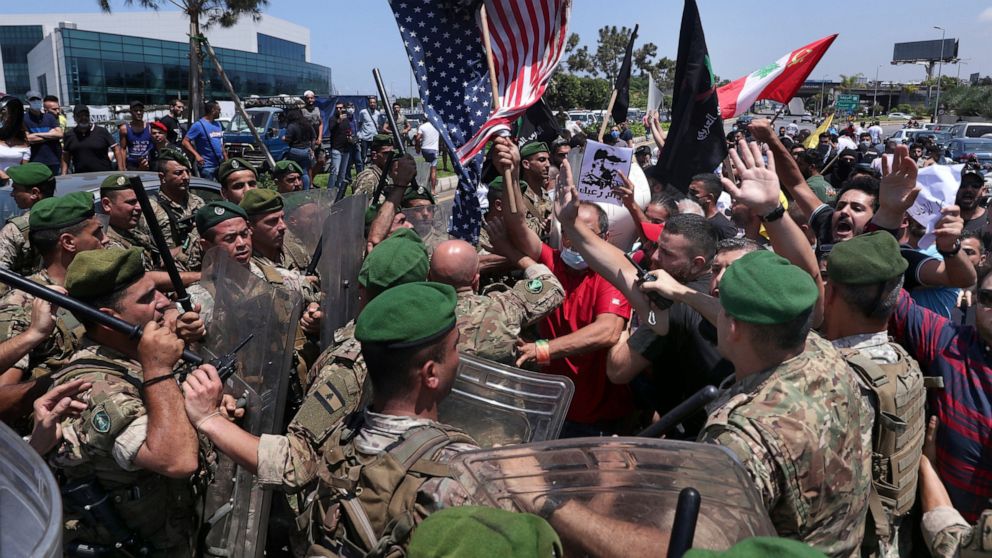 BEIRUT — A Lebanese businessman serving a five-year sentence in the United States for providing millions of dollars to the militant Hezbollah group arrived Wednesday in Beirut after his early release, local media reported.

Kassim Tajideen was sentenced last year in a federal court in Washington for his role in a money laundering conspiracy aimed at evading U.S. sanctions. He was arrested in Morocco and extradited to the U.S. in 2017, where he was charged with laundering money for Hezbollah.

There was no immediate comment from U.S. or Lebanese officials on his early release.

Lebanon’s National News Agency reported Tajideen’s arrival. A local Lebanese TV station, LBC, broadcast a video taken with a mobile phone of his arrival at the Beirut airport. He stepped out of a small jet, wearing a face mask as a necessary coronavirus precaution. The video shows a man rushing toward Tajideen, hugging him and stooping down to Tajideen’s feet in celebration of his release.

A federal judge in Washington had ordered Tajideen’s release in May. The National, an English language newspaper in the United Arab Emirates, said the 64-year-old Tajideen was granted compassionate release due to health conditions and fears of coronavirus infections in prison. The U.S. Department of Justice had contested the release.

Tajideen was accused of conspiring with at least five other people to conduct over $50 million in transactions with U.S. businesses in violation of sanctions barring him from doing business with U.S. nationals and companies because of his support for Hezbollah. Washington has designated the Iran-backed Hezbollah a terrorist group.

In March, a Lebanese military tribunal ordered the release of a Lebanese-American held in the country for nearly six months on charges of working for an Israeli-backed militia two decades ago. Amer Fakhoury’s release raised speculation that Tajideen may be granted early release in return.

Fakhoury, 57, who had faced decades-old murder and torture charges in Lebanon, became a U.S. citizen last year and is now a restaurant owner in Dover, New Hampshire. U.S. officials had called for imposing sanctions on Lebanon to pressure Beirut to release him.

The U.S. Embassy said McKenzie reaffirmed to Aoun the “importance of preserving Lebanon’s security, stability and sovereignty” and the strong partnership between the U.S. and the Lebanese Armed Forces.

McKenzie also made a brief stop at memorials honoring Americans who perished while serving in Lebanon. Bombings in 1983 of the U.S. Embassy and U.S. Marine barracks in Beirut killed nearly 260 Americans and 63 others.

McKenzie’s visit and reports that he may visit the Marine barracks bombing site sparked anti-U.S. protests. Dozens gathered near the airport amid a heavy deployment of soldiers. Some chanted “Death to America” and expressed support for the 1983 attacks and raised Hezbollah and Communist Party flags. Others burned a picture of U.S. Ambassador Dorothy Shea and the Israeli flag.

McKenzie’s visit comes as Lebanon is facing its worst economic and financial crisis, which has triggered anti-government protests and created domestic political tension between rival groups. Amid the crisis, strained relations between Washington and Hezbollah, the country’s powerful militant group with strong political representation, have deepened. Although the U.S. designates Hezbollah as a terrorist group, it is also a major donor to the Lebanese Armed Forces.

Hezbollah leader Hassan Nasrallah lashed out late Tuesday at Shea, calling recent public comments she made that were critical of his group “unacceptable.” Nasrallah also accused Washington of taking advantage of the economic crisis to stir public opinion against Hezbollah and try to “isolate” his group.

“Hezbollah won’t give up. This will only strengthen it and weaken your allies and your influence,” Nasrallah said, addressing Washington.

U.S. Secretary of State Mike Pompeo didn’t respond to questions about Tajideen’s release, but said Washington will continue to enforce sanctions on Hezbollah while calling for reforms to ensure a path out of Lebanon’s current economic crisis.

“There can be no mistake what the United States has done and will continue to do to put pressure on Hezbollah and also to try to assist the people of Lebanon at building out a successful government,” he told reporters Wednesday. “Hezbollah is a terrorist organization and we are supportive if Lebanon as long as they get the reforms right and they’re not a proxy state for Iran in Lebanon.”