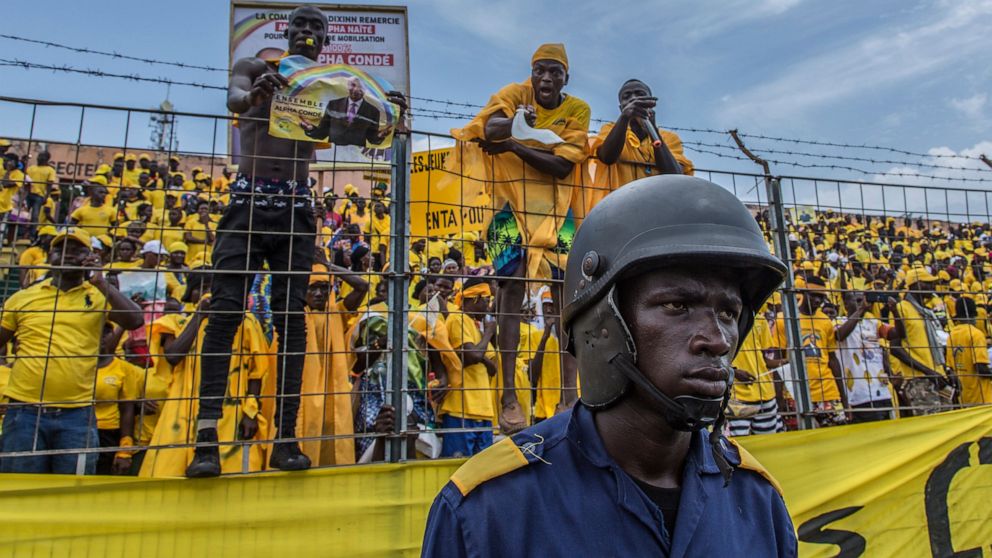 Guinean President Alpha Conde is seeking to extend his decade in power, facing off against his longtime rival Cellou Dalein Diallo for the third time at the polls

CONAKRY, Guinea — Guinean President Alpha Conde sought to extend his decade in power in Sunday’s election, after the country’s constitution was changed earlier this year to allow the 82-year-old leader to run for a third term.

This is the third time that opposition leader Cellou Dalein Diallo, 68, has run against Conde and he warns the president is trying to rig the vote to stay in office in this West African nation of 12.8 million.

The election contest already has inflamed ethnic tensions, prompting the United Nations chief to urge Guineans to refrain from ethnic profiling and violence. The two main candidates draw their support from Guinea’s largest ethnic groups —the Malinke and the Peuhl — and past electoral match-ups have seen bursts of intercommunal violence.

There also were calls for security forces to maintain restraint: At least 50 people have been killed over the past year, as protesters have demonstrated against Conde’s electoral bid, according to Amnesty International.

In the capital of Conakry, voters queued early to cast their ballots, while heavy rainfall overnight delayed the opening of some polling stations. At Mohamed Barry 1 School in the Ratoma neighborhood, Mamadou Bah had mobilized his entire family to turn out.

“One vote less is a loss for my candidate. That’s why all six of my children and my two wives are here to vote — I demanded it,” he said. “We are going to vote for Cellou Dalein to win. And he will be president from tonight.”

Lancey Dioubate said he was supporting the incumbent Conde’s quest for a third term.

“You know, we must give him time to complete his major projects for Guinea, electricity especially,” he said.

Conde has insisted that the constitutional changes were broadly approved by voters, denying that he had carried out a constitutional coup d’etat during a recent interview with Radio France Internationale.

Conde had spent decades as an opposition figure under dictatorship and still maintains he won the country’s 1993 election.

“If I had wanted to be president for life, I would have taken power back (with the support of the military) back in 1993,” he told RFI.

Conde came to power in 2010 in the country’s first democratic elections since independence from France in 1958. Many saw his presidency as a fresh start for the mineral-rich country mired by decades of corrupt, authoritarian rule.

Opponents, though, say he has failed to improve the lives of Guineans, most of whom live in poverty despite the country’s vast mineral riches. In his final campaign speech, Diallo condemned the high unemployment and human rights abuses of the past decade.

“But the heaviest burden has been that of our division,” he said. “This power, which has been incapable of setting our society in motion to create wealth, has tried to set us against each other, hurting our nation.”

As tensions mounted ahead of Sunday’s vote, U.N. Secretary-General Antonio Guterres “urged all political leaders and their supporters to refrain from acts of incitement, inflammatory language, ethnic profiling and violence.”

The International Criminal Court at The Hague has said it is “deeply concerned” about election-related violence.”

“I particularly condemn the use of inflammatory rhetoric by some political actors during their electoral campaign, leading to growing ethnic tensions among the people of Guinea,” ICC Prosecutor Fatou Bensouda said.

Germany: Black Forest fugitive held after 5 days on the run