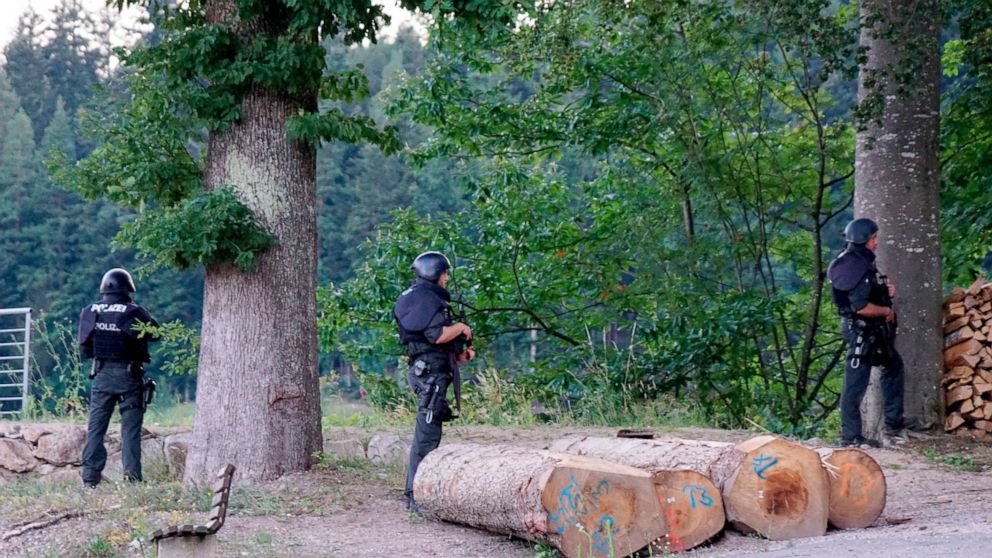 A man who disarmed four officers at gunpoint in southwestern Germany before fleeing into the Black Forest has been arrested after a five-day manhunt that involved more than 2,500 police in total

BERLIN — A man who disarmed four officers at gunpoint in southwestern Germany before fleeing into the Black Forest was arrested on Friday after a five-day manhunt that involved more than 2,500 police in total.

The suspect was found sitting in a bush with four handguns lying in front of him and a hatchet in his lap, as well as a document that officials haven’t yet evaluated but suspect was intended as a suicide note, Rieger told reporters in Oppenau — the small town where the drama started on Sunday.

Details of how exactly the arrest played out were sketchy but Rieger said efforts to talk to the suspect proved “somewhat difficult.” Rausch was slightly injured during the arrest, but not badly enough to be hospitalized, and a police officer suffered a superficial wound caused by the hatchet.

The four missing police weapons were recovered and an additional handgun found. The 31-year-old suspect, who could face charges of robbery by extortion, had yet to be questioned on Friday evening.

“I am very relieved — I think a line can be drawn under a really extraordinary situation for our little town,” Mayor Uwe Gaiser said.

On Sunday, police were alerted to a suspicious person carrying a bow and arrow. Officers conducted an ID check on the man at a hut where he had settled illegally.

Officials have said Rausch initially cooperated but then suddenly pulled a gun on the officers, threatening and forcing them to hand over their service weapons. Nobody was injured.

The incident triggered a large-scale manhunt.

Rieger said the difficult, hilly forest terrain, which the suspect was believed to know well, posed a particular challenge to police — “but we were relatively sure, and it was only a matter of how long it would take, that we would come across him at some point.” He acknowledged “immense public pressure,” and said that more than 2,530 officers were involved in the operation.

Prosecutors have described the suspect as a “weapons enthusiast” but said he was banned from possessing weapons and ammunition in 2010 and had never been in a shooting club. Rausch lost his apartment last fall and had no permanent address since then, according to authorities. Officials have said they don’t know what prompted Rausch to act the way he did.

The fugitive has had run-ins with police before. He was given a 3 1/2-year juvenile sentence in 2010 after shooting a crossbow at a woman and wounding her, according to prosecutors in nearby Pforzheim.