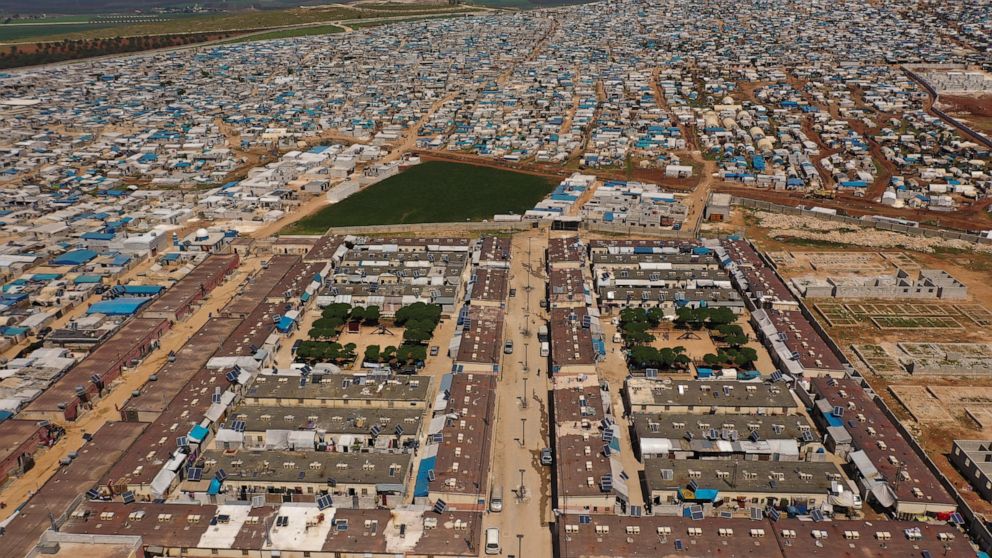 In Syria’s opposition-held enclave, a new kind of panic is setting in

BEIRUT — In Syria’s opposition-held enclave, a new kind of panic is setting in. Already living in fear of frequent government attacks, the nearly 3 million people crowded into the country’s northwest corner now risk losing vital aid as Russian moves at the U.N. threaten to shut down border crossings with Turkey.

At the Security Council, Russia is seeking to stop deliveries through one of two border crossings used for U.N. aid. Residents and aid groups say even a partial shut down may cost lives and will increase poverty, disease and unrest in the opposition-held parts of Idlib and Aleppo provinces.

“We would have a true humanitarian crisis with increased murders and theft, as well as hunger that kills,” said Ghidaa Hussein, a teacher and social worker who is a single mother of a 2½ year-old boy and supports her parents.

Living in a displaced camp at Atmah near the border, she said it would cost more than 15% of her salary just to buy the equivalent of the U.N. food aid she receives.

“It lifts a big burden off my shoulders. If it stops, it is impossible that my salary would last,” she said.

The past two days, the U.N. Security Council has been haggling over U.N. cross-border aid deliveries. Russia, which argues the aid should be sent through its ally the Syrian government, is pressing for aid to be delivered through only one crossing and only for six months, instead of a year. A counter-resolution by Western countries would keep both crossings open, if only for six months. A final vote is expected on Friday, when the current delivery mandate expires.

By vetoing similar resolutions last year, Moscow shut down two other border crossings, including one leading into northeast Syria, run by Kurdish-led forces. The closure hampered aid and medical supply deliveries to nearly 3 million people there.

The prospect of reducing U.N. aid in Idlib and Aleppo is ringing alarm bells.

In May alone, over 1.7 million people received health and medical treatment and supplies through U.N. cross-border assistance, seven international aid groups said in a statement. Of those 1 million were served through Bab al-Salam crossing, which Russia wants closed.

The other crossing, Bab al-Hawa, can’t provide access for aid agencies to all areas in need in the northwest or deal with scaling up the response for the coronavirus pandemic, said the groups, which include International Rescue Committee, the Norwegian Refugee Council and CARE.

“As the cost of food has increased over 200% in the last year, and the country is faced with a global pandemic, it is unthinkable that any access routes could be cut,” the statement said. It said the 2014 resolution that first allowed the aid “remains as critical now as it was six years ago … and should remain free from politics.”

The resolution in theory only concerns U.N. aid, which amounts to about 30% of the aid going into the northwest, said Munzer Khalil, the head of the health directorate in Idlib province. But other aid groups and donor countries would be affected by a reduction because they mostly use the U.N. umbrella and logistics. Some supplies, like vaccines, only come from the U.N., said Khalil.

“The biggest concern for me is the number of people who (could) die because of hunger and lack of potable water and medicine. It is a very bad situation and a very dangerous situation,” he said.

He said accepting only one border crossing would mean Russia would soon push for its closure as well.

“Right now, there are no solutions,” Khalil said. “There is only death ahead of people. There is no future and no present.”

Hussein, the teacher in the camp, said an economic crisis has already made life difficult for all Syrians.

Prices have leaped as the Syrian currency has collapsed. Bread now costs five times what it did seven months ago, putting it out of reach for many. Hussein said one of her neighbors can’t afford bread and doesn’t eat from the handouts she receives every other day to ensure her daughters have enough.

Like many others, Maad al-Khalaf, an Idlib aid worker, said he has given up red meat and other proteins after meat tripled in price.

If aid goes down to one crossing, he said, “this will only make the misery more, the suffering more and the need more.”

Intelsat, launcher of 1st commercial communications satellite, files for bankruptcy… it’s a friend we didn’t know we had