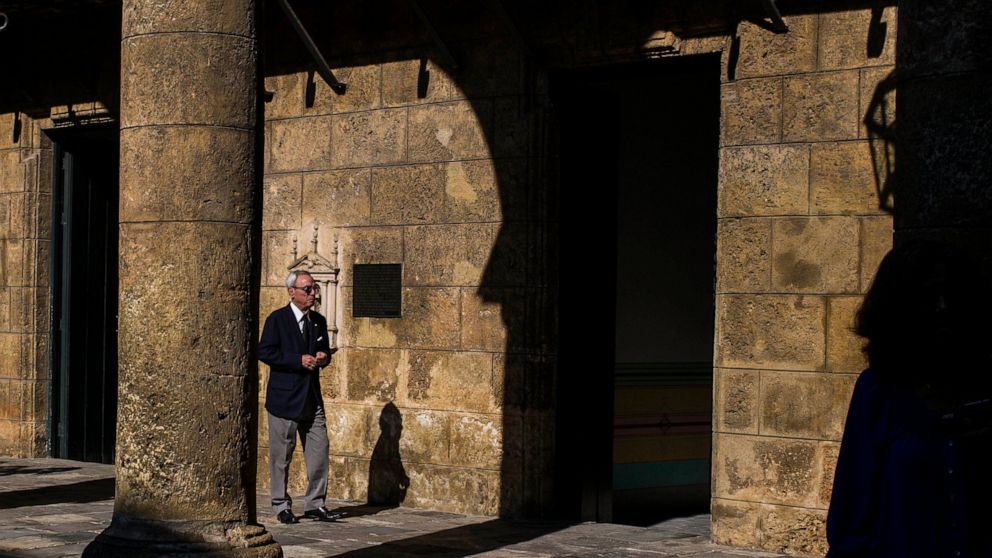 HAVANA — Eusebio Leal Spengler, who oversaw the transformation of crumbling Old Havana to an immaculately restored colonial tourist attraction, becoming the de-facto mayor of the historic city center and one of the nation’s most prominent public intellectuals, has died. He was 77.

He had been fighting cancer.

Leal and his restoration efforts became so famous along the crowded streets of Havana that it often felt like he was holding court when he appeared in public, usually in his trademark, simple gray dress shirts and slacks.

Elderly women would tell Leal that the water that had stopped working in their apartment was back on thanks to him. Others would lodge complaints about their living situation or praise him for reviving Old Havana.

“To call it reconstruction of something that seemed dead and buried may draw dirty looks and dismissals that ours is a romantic crusade,” Leal wrote in a city bulletin in 2010. “But if that were the case, we wouldn’t feel embarrassed to be seen as romantics in times that are so apocalyptic.”

Born in Havana on Sept. 11, 1942, Leal earned a doctorate in historical sciences from the University of Havana, honing his skills as an intellectual entrepreneur who recognized that the resurrection of the city’s historic district could be a moneymaker. That became especially important when communist Cuba embraced foreign tourism en masse after the disbanding of the Soviet Union and the loss of its billions of dollars in annual subsidies to the island brought the economy to the brink of total collapse.

After a series of nationwide economic reforms and the December 2014 declaration of detente with the U.S., Leal’s government-driven restoration of Old Havana gained momentum with the opening of hundreds of private businesses from elegant restaurant to art galleries that filled with tourists as visits to the country soared.

The boom raised worries about gentrification as expatriate Cubans or those with ties to foreign capital bought out longtime residents and turned their homes into businesses.

Leal spoke little about the new phenomenon, but consistently argued for respecting Old Havana’s past without being trapped by it.

“I’ve always spoken out against the mummification of the city,” he said in 2016. “It wouldn’t be wise to show off the past under glass.”

In 1967, Leal became city historian, replacing his mentor, Emilio Roig de Leushenring. He oversaw the reconstruction of the old municipal government building on the stately Plaza de Armas, then used a mix of charisma and diplomacy to get all of Old Havana designated as a UNESCO world heritage site in 1982.

That distinction brought international funding to revitalize the area, but Leal was also granted unprecedented autonomy by government superiors, allowing him to levy taxes in the neighborhood and keep the profits his projects generated to reinvest in new rebuilding efforts.

Leal was a member of Cuba’s parliament, but enjoyed more power serving on the Central Committee of the Communist Party. It was not uncommon for him to travel to the airport to greet arriving foreign heads of state, as well as oversee public political and cultural events.

By February 2008, Leal’s name was mentioned as a candidate for major promotion when Raul Castro succeeded Fidel as Cuba’s president — especially given the city historian’s generally moderate political views.

Instead, Leal stayed at the helm of Old Havana, the heart of a city founded in 1519 by the Spanish. Once ringed by a city wall, the historic district is a mix of Baroque and neoclassical monuments, crammed up against colonial-style homes and apartment buildings with balconies and courtyards — most of which was decaying since Castro’s government couldn’t afford the upkeep.

Before Leal’s work, Old Havana had become a tangled collection of dark streets, winding past buildings in ruins, many propped up by poles to prevent their collapse. While pockets of open decay can still be found, they are now outnumbered by the regally restored plazas and colonial structures.

Leal rebuilt tourist-friendly sites such as El Floridita, where Ernest Hemingway is said to have helped pioneer the daiquiri, and another famous watering hole, La Bodeguita del Medio. He oversaw restoration of some of the faded facade of the Malecon, the city’s famous seawall, and El Morro, the Spanish fort that guards the entrance to Havana Harbor.

Leal’s office also returned many restored buildings to their original functions, such as refurbished docks and tourist sites focused on specific themes — like the El Conde de Villanueva, a hotel that caters to cigar aficionados. Today, Old Havana’s cobblestone streets are jammed with art galleries and museums, churches, shady parks and alleyways reminiscent of Rome or Barcelona.

One of his largest projects was the restoration of the domed Capitol building to become the seat of the Cuban parliament as it was before Cuba’s 1959 revolution.

Part of the rebuilding effort also created nursing homes and dining rooms for government workers, as well as daycare centers, schools and drug rehabilitation clinics. Thousands of Cubans were forced from their tenament-like homes to make room for rehabilitation projects, but Leal said none were displaced without being offered comparable places to live.

But the on-the-surface charm of Leal’s efforts belied the problems of Cubans who live in grinding poverty mere blocks from tourist areas.

Indeed, islanders call Old Havana “the Vatican” since the streets are kept especially clean and free of petty thefts and small crime so as not to spook tourists. Even the power lines have been laid underground, meaning the neighborhood is spared many of the frequent power outages that plague the rest of the city.

When the New York Times wrote a largely favorable 2007 article saying that Leal’s work had far more aesthetic benefits than real value for Old Havana residents, a visibly angry city historian organized a press conference to denounce the article, the reporter who wrote it and the newspaper.