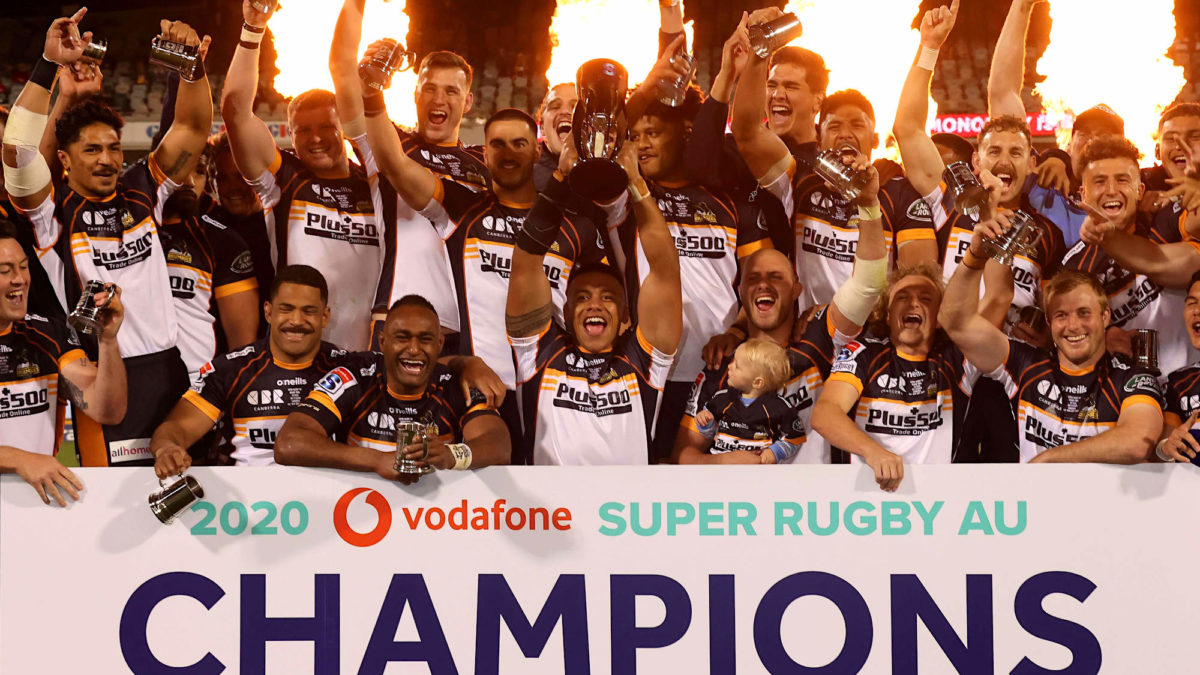 The ACT Brumbies have survived a furious late onslaught from the Queensland Reds to win the inaugural Super Rugby AU final and be crowned champions.

The Reds looked down and out with 20 minutes to go in the match, only to surge in the final quarter and threaten to upset the home side. But a crucial lost lineout in attack cost them the chance to hit the lead, and the Brumbies’ stout defence was able to hold on against their less experienced opponents to claim a 28-23 win.

The hosts were the first to hit the scoreboard, uncharacteristically pointing to the posts after Fraser McReight gave away a penalty on the 22 directly in front. Noah Lolesio made no mistake from the tee.

It didn’t take long for the Reds to respond, Tom Wright straying offside and allowing James O’Connor to level the score with a three-pointer of his own.

Keeping with the theme of scoring off penalties, the first try of the match was a Brumbies trademark. Kicking to the corner after a marginal high-tackle call went against Angus Blyth, the hosts were able to force their way over in the rolling maul at the second time of asking, Folau Fainga’a the beneficiary. Lolesio was able to extend the lead to seven even with the kick close to the sideline.

If their first try was one for the forwards, the second was anything but. A towering Lolesio bomb was spilled by Filipo Daugunu on the Reds’ 22, gifting field position to the Brumbies. After two powerful busts from Tevita Kuridrani, Lolesio was able to offload to Andy Muirhead, who did exceptionally well to burst through and find the tryline.

The Reds answered on the half-hour through some brilliance from Jordan Petaia. O’Connor flipped up a loose ball to the youngster 40 metres out, and he surged through the broken defence before putting Harry Wilson over with a silky flick-pass.

The gap was narrowed even further when, on the stroke of halftime, Will Miller was off his feet at the ruck, giving away a coach-killing penalty to allow O’Connor to send the teams to the sheds with the Brumbies up by just two points, 15-13.

The Reds would have been happy enough with that scoreline given their Brumbies enjoyed the better of the play before the break, while the hosts would have been frustrated after leaving the opposition red zone scoreless late in the half, when a turnover inches from the tryline from JP Smith and excellent ensuing clearing kick from Tate McDermott getting Queensland out of trouble.

What the Reds wouldn’t have been happy with was their casualty ward. Petaia picked up a left hip injury during his try assist and didn’t make it back on the field after halftime, while Lukhan Salakaia-Loto was concussed in trying to lay a big hit on Lachie McCaffrey three minutes after the break.

The news for Brad Thorn’s men didn’t improve after that, with Tom Banks straightening off his left foot to score the Brumbies’ third try of the match. Lolesio kicked truly, and the youngster put another three points between the sides with a drop goal just two minutes later.

The Reds, whose discipline was poor all night, were then reduced to 14 men when Daugunu was sent to the bin for a lifting tackle on McCaffrey. Another high tackle followed soon after, and the Brumbies took the chance to push the margin out to 15 with 25 minutes still to play.

Another James O’Connor penalty pulled the gap back under two converted tries heading into the last quarter of the game, and five minutes Angus Blyth scored under the posts to set up a thrilling finish.

The try was a controversial one, with McDermott going on a mazy run through the Brumbies defence but seemingly knocking the ball on when he hit the ground. However their was insufficient evidence to overturn the on-field decision of try, and O’Connor added the extras to make it 28-23.

It was all Reds from there on out, the visitors hammering away at the Brumbies line and enjoying excellent field position as the Brumbies lost the cohesion in their play which had made them so dangerous earlier in the match.

However, they were unable to find the winning score, a lost lineout in attack, a late knock-on in their own half, and some superb defence from the home side handing a famous victory to the Brumbies.

The Falcons had a 99% chance to win vs. Bears and Cowboys, but lost both games

Taking the NBA draft to the AFL