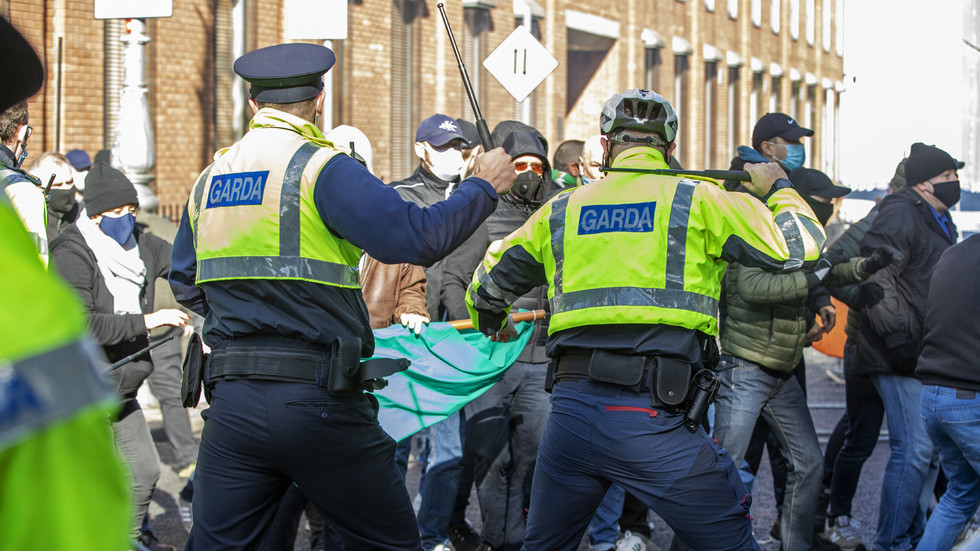 More than 100 demonstrators protesting ramped-up Covid-19 lockdown restrictions clashed with police in Dublin, with 11 being arrested and an investigation launched into the organizers of the event.

Nine of the people arrested have been charged with public order offenses, as the protest breaks lockdown restrictions, which only allow citizens to leave their homes for essential trips.

Law enforcement attempted to block a crowd at Grafton Street and ordered the demonstrators to disperse as they were “in breach to public health regulations.”

A small group managed to break through a wall of officers deployed to the area and video shows batons being used to stop the protesters and force them to the ground where they were handcuffed.

Protesters were pushed and told to leave the street as they cursed at officers wrestling with demonstrators who refused to disperse.

Vans were also parked on the street to help block the marching crowd and prevent a sit-down protest.

The clashes were brief as many protesters dispersed as they were told.

Another video shows protesters marching through the city, some yelling “take off the mask” as they walked.

“The Covid-19 pandemic remains a public health crisis and An Garda Síochána continues to appeal to all citizens to comply with public health guidelines and regulations, in particular essential journeys, in order to continue to save lives,” police said in a statement about the clashes.

All 11 people, aged between 20 and 60, arrested have been released, and two were let off with warnings.

Ireland was put into a strict ‘Level 5’ lockdown this week with non-essential shops being ordered to close, home visits being banned, and citizens ordered to not travel beyond 5km away from their homes for exercise.

UK to bolster defense spending by ‘most since Cold War’

France to close open-air markets, crack down on JOGGING to stop coronavirus spread